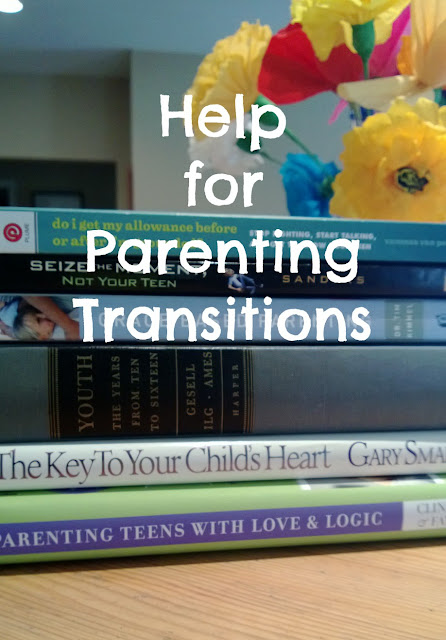 Lately, I've felt myself to be in what I call a "parenting transition".  You know how sometimes you're going along and things seem pretty smooth, pretty simple, and then suddenly nothing you were doing seems to work anymore, and you feel like your family is coming apart at the seams? No, only me?  Well, anyway...
I think it may be due to the start of a new school year and new activities, or maybe it's just plain old GROWING, but we and our kids have felt a bit out of step lately.  (That's a nice way of saying there's been a whole lot of fightin'!)
I decided to go back to some of the parenting books that have stood me in good stead over the years, as well as read some that were new (to me).
You can see my stack in the photo above.  I thought I'd take a minute to tell you a bit about each one, as much as I can, just in case you find yourself in a parenting transition, either now or in the future.
Do I Get My Allowance Before or After I'm Grounded? by Vanessa Van Petten.  The author of this book calls herself a "youthologist" and is quite young herself.  She writes as someone who is in-between the ages of the teen and the parent.  I've not read the whole book yet, but do like her perspective and her focus on relationship-building.
Seize the Moment, Not Your Teen by Bill Sanders.  I picked this one up because I really like the title.  Too often I get swept away by anger or frustration and lose the opportunity to really connect with my teens.
Grace Based Parenting by Dr. Tim Kimmel.  I have loved this book so far.  This one is definitely from a Christian perspective.  The author emphasizes a tenderness and a coming-alongside that doesn't come so naturally for me.  I need this point of view.
Youth:  The Years from Ten to Sixteen by Arnold Gesell, Frances Ilg and Louise Bates.  This is a much older book and is no longer in print; the copyright in my book is from 1956.  While much of it is outdated, I like that this book is quite comprehensive and detailed.  I have always found the series by these authors on the different ages to be revelatory; this edition is no different.  Best of all, it cover three of my four children!  There is much to take in here, so I read it in small doses.  It's a good resource book.
The Key to Your Child's Heart by Gary Smalley.  This is a classic from back in the 90s.  I've had this book for years (I think my mother-in-law gave it to me before we had children), but had never read the whole thing.  At first, I found it hard to read because it felt like the author was just describing his perfect family, WHICH I DON'T HAVE. Sometimes I find parenting books unbearable because they hold up an impossible standard that just crushes me.  But as I read further, I saw that the author does NOT have perfect family, and he does have some really good suggestions for creating a close-knit family, and for getting closer to kids who may have shut you out.  I liked this one.
Parenting Teens with Love and Logic by Foster Cline and Jim Fay.  I love anything by the Love and Logic people.  I think their ideas make so much sense and REALLY DO WORK if you can discipline yourself to really try.  This is the kind of parenting book to keep on your bedside table and just read a bit every night.  Because we always need help, we always need reminding.
So there's my reading list, people!  Tell me, what books of resources have you found helpful? 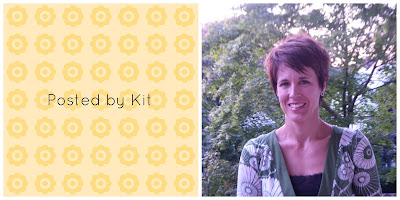 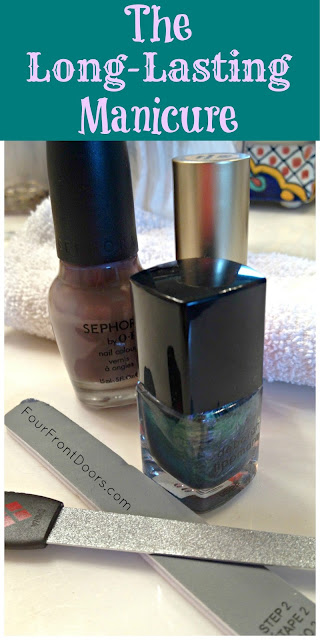 I've used many brands of polish, in many price ranges.  My favorites are OPI, Essie, and Deborah Lippmann, but I've also found some drugstore brands I like, such as L'Oreal and Milani.  Most will work as long as you follow these tips.
Store polish in a cool dark place, and just go through your stash and toss out any old and goopy polishes.  Don't try to save them with polish remover.  Just say goodbye and move on.
I'm not a professional by any means, but these are my personal tips that have worked for me.
1.  After removing polish, file nails in one direction only.  Do not file across, as this can give a rough edge to nail tips.2.  Do NOT soak your nails right before or after a manicure.  You don't want added water here.3.  (This is my #1 tip:)  Buff nails GENTLY and lightly to remove ridges and give a smooth surface.  Don't do it too much or you could thin the nail.  This step has made a HUGE difference in the staying power of my polish.4.  Wipe nails with acetone polish remover to prevent residue like water, lotion, or natural oils and to remove any particles left from filing and buffing.5.  Start with a sticky base coat.  6.  Use thin coats of polish, and let it dry between coats.7.  Be sure to cover the free edge of the nail with polish to "seal" the manicure.8.  Give nails plenty of time to "cure," even if they seem dry.9.  Use a top coat, and try to do it every day.10. Use cuticle oil.
This might look like a lot of steps, but once you do it a few times, it really doesn't take long at all.  The best part is that your manicure can last much longer with very little chipping in between, so it's worth it.    Hope this helps your manicure look pretty longer!
No comments:

Pumpkins are popping up everywhere lately, as we near Halloween. I remembered the Big Bird pumpkin my daughter and I made a few years ago and thought I'd share. Check it out! 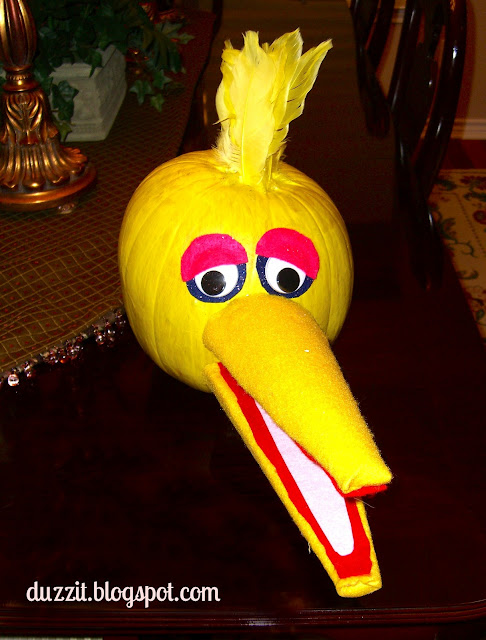 Figuring out how to make it was more difficult than actually making it. So if you want to make one like this, I'll share with you how we did it (finally, after several missteps).

Paint the whole pumpkin yellow.  It might take a couple of coats to get full coverage. Let it dry.

Make the beak - cut the Styrofoam cone in half lengthwise. Cut the yellow felt to fit, wrapping the ends like a present and gluing everything down as you go.  Then cut out the red felt to fit inside the flat cut edges of the Styrofoam, both sides.  Next cut a light pink tongue to fit inside that (only one, obviously). See photo for example. Glue it all together well.

Place the googly eyes on a piece of paper and draw a circle around them at the size you want the dark outline to be.  Then draw out two semi-circles on the paper for the eyes. This is just so you can have a template for cutting out the felt. It's not 100% necessary, but it made it easier for me.

You might need to top this off with some glue.  Oh, and don't get cute and think you can do this part with toothpicks. Nope, I'm gonna go out on a limb and say it can't be done. I don't know that for a fact, but I do know that it couldn't be done in my house, so that's my story.

Last thing, get out those feathers and start gluing them to the stem. They'll stand straight up, just like our pal on Sesame Street.  Let it dry overnight.

Then display that bad boy, and watch the Big Bird fans squeal with delight! 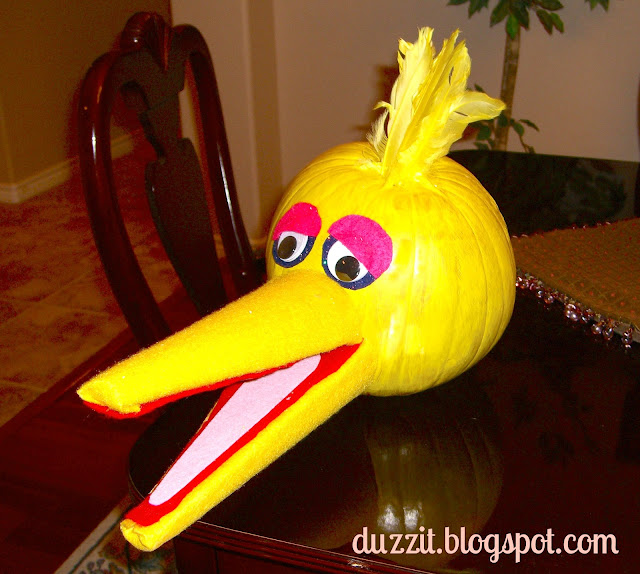 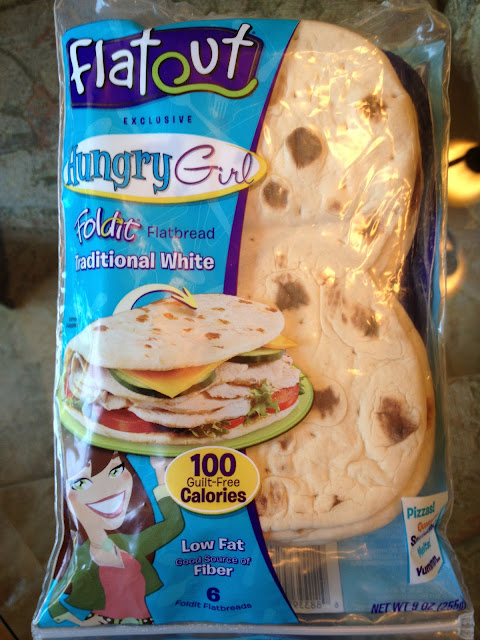 I stumbled upon this Hungry Girl Flat Out flatbread on my last grocery outing.  There were a few other varieties, but I decided to try the traditional white since I had already purchased our grainy breads earlier in the week.

The size is not huge, but it's good for a sandwich or baked pizza.  The taste was good.  The thing that impressed me most was that the texture was smooth and wasn't gritty like some "light" white bread products can be.  These were flat yet somewhat fluffy - like a combination between a flour tortilla and a slice of white bread.  Very good!

I have not been compensated in any way for this review, and I purchased the item myself.

Email ThisBlogThis!Share to TwitterShare to FacebookShare to Pinterest
Labels: Duzzit-Tested 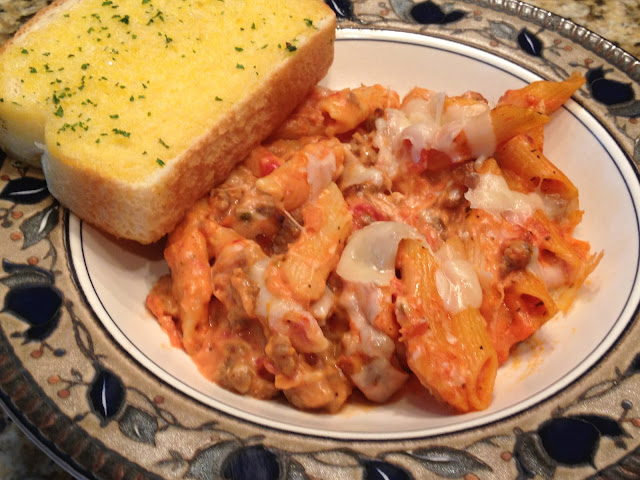 I have seen versions of this dish all over the place, and this is my take on it.

Cook sausage until cooked through. Drain and set aside.

Cook pasta according to directions and drain.

Remove from oven and top with shaved parmesan cheese.  Bake for an additional 5 minutes.  (Grated parmesan can be substituted, but shaved gives a nice melty texture.)

Serve with garlic bread and a salad, and you're all set.  So simple and tasty! 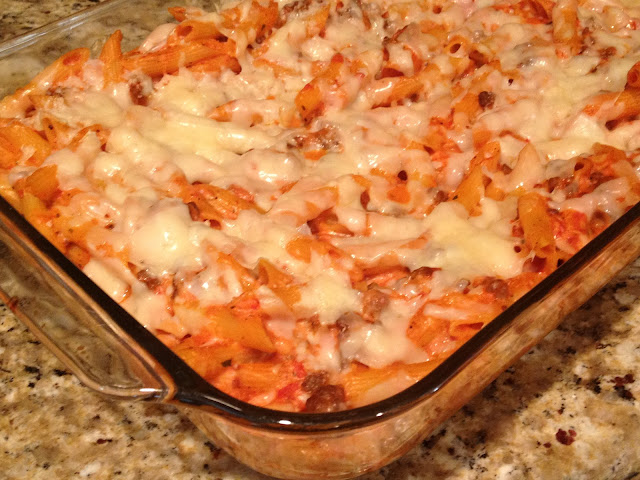 Sometimes it's just about the pretty pictures, and sometimes I try it out, figure it out, or throw it out.